Walking, for humans, is a natural form of locomotion. Our bodies have evolved in such a way as to be able to walk and walking is a form of activity that keeps our bodies functioning properly. However, walking is generally a slow way of getting from A to B and so people use other forms of locomotion to achieve the task of transportation. We do this, arguably, at the risk of our health. Generally people who walk regularly maintain good physical fitness.

This is so much the case that we are continually advised by doctors and fitness experts to walk shorter distances rather than taking transportation, to climb stairs rather than taking elevators or escalators. Contrarily some say that walking is not good enough and that we must run or jog or swim or do other forms to actually benefit from the exercise. That argument will continue amongst the talkers. I chose to be one of the walkers.

I walk about 1 1/2 miles probably 5 times a week. I generally walk this at the military pace of 3 miles per hour, the pace I learned in the military as a young man. It works for me. If the weather is warm (80 F or higher) this will be fast enough to work up a bit of a sweat. Otherwise it is about as long a walk as I can take without feeling I need to be doing something else.

In addition to getting a bit of exercise, the walking provides some relaxation. I walk along the linear park in Clearwater and Dunedin, in Florida, that runs between the Alt 19 highway and the intracoastal waterway. This park is teeming with birds of all sorts which I enjoy observing. Sometimes the mullet are jumping. I usually walk in the morning and it is interesting to see the play of light on the water and on the buildings a few miles away on Clearwater Beach. As I walk I exchange greetings with the regulars who also frequent the park and also with the many visitors that we have in the area. All of this provides a relaxation which is about as close to meditating as I get.

I have gradually come to realize that there are a large number of different factors that I take into account as I walk.

Our linear park has a sinuous concrete walkway running its length. Almost everyone who walks the park walks on the concrete walkway. I do not. I gradually came to realize that walking on an essentially flat concrete surface was not really what our bodies evolved to do. When walking on the concrete most of the muscles in the leg are not exercised. There are no rotational forces acting on the foot, ankle, knees and hips and so all the many muscles that have evolved to deal with such forces do not get exercise and atrophy. Additionally, it takes more physical effort to walk on the grass as it yields instead of providing a firm reaction to your foot when it lands on the surface — this is good as I am interested in getting the exercise. 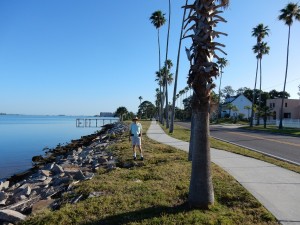 Walking on the ‘grass’ along our linear park. Note the uneven nature of the trail at this point
One of the additional forms of exercise that you get from walking on the grass is improved balance. Because your feet are continually connecting with the ground in different attitudes, you need continually to be adjusting the way your body is holding itself so as to not fall. When I first started such walking I was very conscious of this need to be continually re-balancing. Now, after a few years, my balance has returned and I hardly notice it. I also further work on my balance by doing 360 degree turns while walking and by walking backwards for about 200 feet every day. Balance is also enhanced by dealing with the minor obstacles I encounter when I walk on the grass. We have ‘potholes’ and occasionally I step into one — but I don’t fall. I have to change my pace sometimes to deal with crossing gaps or stepping from one place to another. The surface changes from grass, to mulch, to concrete blocks, to whatever, all requiring adjustments in the pacing.

There are a few other things that I notice in my walking:

Now that you are improving your physical conditioning by walking you really need to consider some additional physical activity. I fell, while walking, a couple of years ago. I had not been paying attention to where I was and what debris was in the path. I tripped, bounced off a tree and crashed into some concrete. It was not nice and I was banged up with abrasions and a sore arm from trying to break my fall from it. One month later I started a training program based on some Pilates with a bit of resistance training. A year later I again fell — I was playing with my cell phone trying to take a photo rather than paying attention to where I was walking. The cell phone was not damaged — I was. But not nearly as bad as the previous year. My core muscle strength had helped considerably in letting my body deal with the accident and I just had a couple of scrapes. Do get onto a program that address your core muscle strength and also your shoulders and arms. With such conditioning you will be in better health and, if you do fall, better able to handle the impact.