Like many who have enjoyed the sun for many decades, I have ended up with occasional spots of squamous cell cancer. Instead of minor skin surgery I developed a treatment using broccoli and duct tape . . . an inexpensive treatment I can do at home and which provides a complete cure!

It is generally considered that these cancerous breakouts occur in cells that were damaged, perhaps many year ago by ultra-violet rays and particularly when severe sunburn was experienced. Often only one or two such sunburns will result in damage decades later.

I first experienced squamous cell cancer in 2009 when my GP referred me to a dermatologist in response to my complaint about a scaly area on my ear. The end result was a Mohs surgery to repair the damage. In this type of surgery, the surgeon removes a thin layer of the affected area and tests are made to determine if all the cancerous cells are removed. This process is repeated until all the cancer has been removed. I was fortunate and only one scrape was required to clean out the cancer. Once that is done, a skin graft is made to cover the affected area. In my case a bit of loose skin from behind the ear was used for the graft. The following is a photo of the end result. The graft is the pinkish area on the forward central part of the ear. 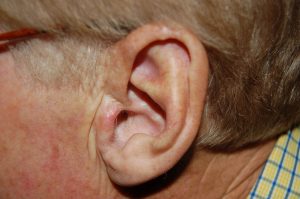 As a result of that occurrence I started having annual screenings of my whole body for skin cancer. Immediately, I received treatments on my face for areas which are deemed to be pre-cancerous. These are areas that typically get a bit scaley or rough. I recognize them now and seek treatment if they occur. The treatment consists of cryotherapy with a liquid nitrogen spray that freees the area killing the skin cells in that area. The killed cells slough off over a period of a few days and the new skin is smooth and not pre-cancerous.

About 2014 a body screening discovered a spot on my back that looked cancerous. A biopsy was done and it turned out to be squamous cell cancer. I went back to the dermatologist and a small portion of the skin was removed to deal with the problem.

Then in the summer of 2018 another such spot was detected on my back. Again a biopsy was done and it turned out to be squamous cell cancer.

I was traveling a lot at that time and after three failed attempts to schedule the minor surgery, I got to wondering if there was something I could do about it myself.

In 2018 Dr. Joel K. Kahn’s book “The Plant-Based Solution” [1]was published. I had read the book and recalled that he had written of the science behind the cancer fighting qualities of broccoli and other cruciferous vegetables. Many other authors had commented on the importance of these foods in the diet for fighting cancer and we had been consuming such vegetables as an important part of our diet. Yet I still was getting these cancer instances. Here is what Dr. Kahn wrote:

“Many Studies show that the higher the intake of [cruciferous] foods, the lower the risk of cancers. There is a beneficial chemical called sulforaphane that can be produced by eating these foods. Sulforaphane leads to an increase in the production of protective anti-oxidants via a pathway called nrf2.

The trick is getting the most sulforaphane from your cruciferous vegetables is to chew them. Cruciferous vegetables are like a “glow stick” because before ou break them open by chewing, two chemicals are kept apart. The enzyme called myrosinase is separated from the precursor of sulforaphane called glucophoranin. . . . When the foods are chewed and cell walls broken down, the precursor and the enzyme mix together producing the sulforaphane, and then the nrf2 pathway is activated” [1]

I recalled the gist of this explanation on a flight which I had to take on short notice and which had caused yet another cancellation of the surgery to remove my cancer. I recalled, too, that Dr. Caldwell Esselstyn Jr., in his lectures (for example in his PlantStock 2012 presentation) had also talked about the need to chew cruciferous vegetables to get the full cancer fighting benefit of the food.

I got to wondering: It is fine to do all this chewing, but then the food goes through the digestive system and into the blood stream and then has to make its way to where the cancer is in the body. In this case the cancer was on my skin. Why not just break up the broccoli cells using a mortar and pestle and put it directly on the cancer to save it the long, somewhat random trip through the body?

When I returned home from my trip, I explained to my wife, Christine, what I had planned. It required her assistance because I could not reach my back where the cancer was growing. She looked at me in utter disbelief! However, she did agree to put some ground up broccoli on my cancer to see if it would work (I pulled out all the stops! I remembered that in my childhood some of the older people sometimes had mustard plasters on their bodies — mustard is cruciferous). Then the problem was how to keep the ground up broccoli on my cancer spot. Solution! Duct Tape! (it solves a lot of problems). But we also needed to keep the moisture in the ground broccoli so that it could work. Nothing like a bit of plastic wrap. And that is how we started the treatment.

At the same time, Christine, ever sceptical of my strange ideas, decided to do her own research. Lo! and behold! It turns out that this approach is practiced in New Zealand. An article written by Dr. J. Rozencwajg, NMD in the The NZ Journal of Natural Medicine [2] describes how cases of squamous and basal cell carcinomas, much more serious than mine, are successfully treated by applying broccoli to the wounds. Dr. Rozencwajg provides many photographs to illustrate the success of the treatment as well as a detailed discussion of the biochemical nature of the cure. The article also provides a number of other references supporting the science behind these cures.

More recently, Life Extension Magazine has produced an article on the value of cruciferous vegetables. [3] This article gives a good description of the value of cruciferous vegetables in curing cancer as well as the the problems of delivering the sulforaphane to the cancer site. It also discusses DIM, another active nutrient also found in these vegetables. Life Extension sells a supplement that packages the myrosinase separately from the glucophoranin in a capsule so that the two do not mix until they reach the small intestine, hopefully thereby improving the
bioavailability of sulforaphane at the sites of cancer in the body. But if you are dealing with skin cancer I think that a poultice is the best solution.

So we applied the poultices to my back. It was a somewhat random approach. We would put a poultice on and then forget about it for a number of days. Then we would replace. This went on for a couple of months or so. When we took the poultice off we could see that there was still some evidence of the cancer and we would continue with another one. But eventually, after a few months we found that we could no longer detect the cancer and so we stopped applying the poultices.

A few months later, I went in for a routine body scan for cancer. As usual, I was again ‘zapped’ on the face for pre-cancerous ‘rough’ spots. But, then, the dermatologist realized that the previously diagnosed cancer was still there. She wanted to do another biopsy. I declined, which led to a ‘CYA’ letter from her organization. I realized I needed to go back to my broccoli treatment.

By this time I had found a suitable, commercially available, alternative to duct tape. We resumed the treatment and tried to be more rigorous in pursuing it. After a couple of months or so, the cancer seemed to have again disappeared. However, based on our previous experience, we continued the treatment for several more weeks, although we could not see any evidence of the cancer.

Recently, I had another body scan by my dermatologist. SUCCESS! The dermatologist confirmed the cancer was gone!