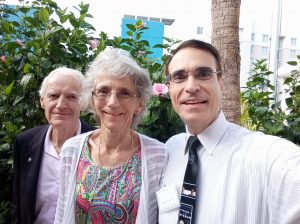 On 4 May 2019, Christine and I spent an exciting hour with Dr. Jose Cordeiro author of “La Muerte de la Muerte” and candidate for the European Parliament. While currently living in Spain, Jose is in many ways a citizen of the world continually traveling as he pursues the many areas in which he is active. He is an exciting futurist with fascinating view of the opportunities that are evolving for mankind. During the short time we spent with Jose we talked about a number of the interests that he has: